We’ve got a final, 12′ x 50′ strip of garden–once home to the concord grapes we inherited with the property, that had a virus and would tease us each year with a generous fruit set before every grape withered on the vine a few weeks before ripening, it now has a lot of weeds, one big pink rose bush, and some under-performing raspberry bushes that I’m going to transplant to a better location, and the pet cemetery.  Located on the western side of the garden, it’s the perfect spot for a mix of edible and functional landscapes–fruit bushes and trees inside tall, dense stuff that will deter the neighborhood’s horde of mutant deer from leaping the fence. We’ve thus far managed to deter the  deer only by fencing every individual bed, making it difficult for them to move around in the garden.  We’d failed at a single fence around the outside of the garden–the big deer, led by the freakish “Cow Doe”–a deer so big, so fat on the riches of vegetable gardens, flowers, and shrubbery that it has grown to a frighteningly massive stature.  It acknowledges not enemy, it fears no hazing and laughs in the face of scent-based repellents.  I’ve shot it in the ass with a bb gun several times, to no avail–hence the build our landscape with so much stuff the deer can’t cross straegy 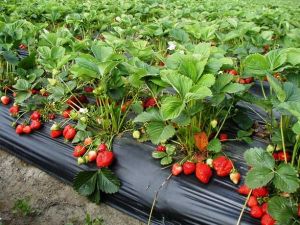 For the same reason, we need new strawberry bushes–while my wife will still go to the U-pick for her traditional 34 gallons of decadent bliss next summer, and hopefully every summer, forever, to the end of time, it’s nice to have some ever-bearers in the home garden to provide a jolt of summer bliss.  While I like a cool berry, there is something about a sun-dappled berry, right off the plant, on a summer morning right before the dew burns off.  So, we need about 50 plants–I think we’re going with Ozark Beauty.  Why do we need new strawberries?  The deer knocked the fence down and ate them.

The centerpiece of this new development will be plums.  We’ve had a hell of a time ordering plum trees.  Two years in a row I ordered trees from a nursery, and they were allegedly shipped, but never received.  One order was sent to an address “1000’s less than mine”–pretending that I lived at 9995  my address was processed as 995, and the college students who lived there let the carton sit on their porch for 2 months, not great for bare root trees.  Got a refund, and a discount, but by the time it dawned on me that they weren’t coming (I held out such hope) I was unconvinced enough time remained in the season for the trees to establish themselves.  It happened again last year–but the nursery insisted the address was right.  The nursery closed over the winter–I wonder why.

So, I’m shopping at Stark Bros. this year, since our local nurseries don’t grow their own plum trees.  I’m looking at Fellenberg (pictured) which bears in September, and Earliblue, which bears in early August, for sustained harvest–all goes as planned, we’ll have plums, plums, plums for two months straight. 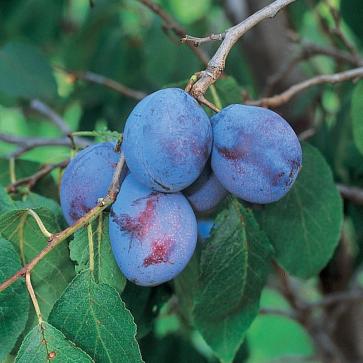 Doesn’t that make you hungry?  I never ate plums growing up, but my wife did–her dad had a pair of plum trees in the back yard.  She got me hooked on the sweet, tender fruit, and there’s been no looking back.  Well, maybe a little, see, here is an interesting story about that–we were visiting, and I’d just eaten my first plum ever, only to find myself in the throes of a passion so fierce and fiery it consumed me.  In the middle of the night I woke up with the munchies and ate two more…then another two…they were so good…I ate two more…and an eighth, a ninth.  Do you see where this is headed?  I woke up about 90 minutes later, and quickly became certain I was going to die.  It hadn’t occurred to me that prunes are just dried plums.  Lesson learned. 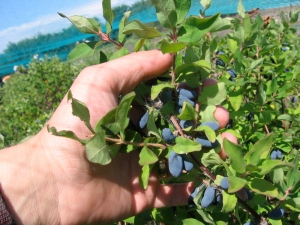 The final target for my fruit avarice is honeyberry–otherwise known as blue-berried honeysuckle–that caught my eye several years ago.  I’ve finally decided that I want a few of these little bad boys–supposedly they fruit are wonderfully sweet, looking a lot like oblong blueberries.  I’m eager to see what they do–how they do, and how they taste.

I’m tempted to try last year’s super-trendy fruit, the mysterious goji-berry, but the three items above are going to cost me about $80-$90, we want to add a few more ornamental trees (serviceberry and something else–but 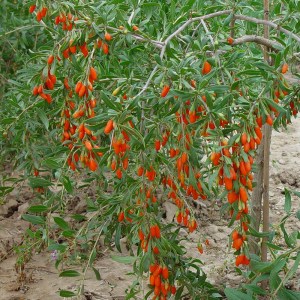 that’s for another post) as well as change another corner of lawn into flowers, specifically about 800’sq devoted to a mixed bed of pollinator-friendly perennials and self-seeding annuals, a sort of “butterfly garden” to keep the bugs happy–and gardening isn’t supposed to be an expensive obsessions–er, hobby–but the gojis are pretty dear, price-wise.  Maybe when trends turn to the next unlikely exotic, goji will drop and I’ll buy them.  To tell the truth, I don’t know anything about Goji, except  that they’re pretty, packed with the kind of good stuff about which I should pretend enthusiasm (natural stuff), and tasty–the truth is, I’m in it mostly for the tasty, then for the pretty, then for the stuff that makes my bones strong and my organs functional, if not particularly efficient.

Native, Militant Westsylvanian (the first last best place), laborer, gardener, and literary hobbyist (if by literary you mean "hack"). I've had a bunch of different blogs, probably four, due to a recurring compulsion to start over. This incarnation owes to a desire to dredge up the best entries of the worst little book of hand-scrawled poems I could ever dream of writing, salvageable excerpts from fiction both in progress and long-abandoned. and a smattering of whatever the hell seems to fit at any particular moment. At first blush, I was here just to focus on old, terrible verse, but I reserve the right to include...anything. Maybe everything, certainly my love of pulp novels, growing garlic, the Pittsburgh Steelers and howling at the moon--both figuratively and, on rare occasions, literally.