I agree with the profundity excerpted below.  It is so deeply wrong that it’s called Almond Milk. There are no nipples on almonds. None. They can’t be milked. They don’t make more tomorrow. They’re drowned, then cracked and crushed and churned through a mechanical extractor and squeezed through a filter. What’s left, that people drink, is more like blood. They should call it Almond Blood.

Following through on my vow/threat/promise to pass along, hype, and propagandize every bit of pro-Pittsburgh media content I encounter, because it’s the best damned city in the universe, and you deserve to know.  This article fits perfectly–I was just sitting on the patio with my sister over the warm, utterly lovely weekend, describing some good Pittsburgh eats, and was trying to make her understand just how otherworldly this miraculous cake is.  You owe it to yourself to click–and remember, Prantl’s delivers.

Thank You, Pittsburgh, For The Greatest Cake America Has Ever Made

Sometimes, we find something so delicious that even though we want to keep it all to ourselves, we feel it’s our duty to share it with you. This is one of those times. So behold, without any affiliation or advertising ties, the newest food we’re excited to share with you….

And it that doesn’t convince you, here’s another reference: 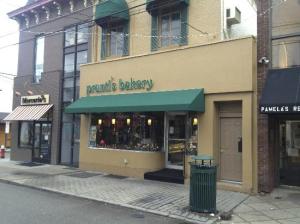 As I mentioned in an earlier post, I was busy with my kids for their swim meet over the previous weekend, rising before 5am both Saturday and Sunday in order to make it to Chartiers Valley, on the other side of Pittsburgh, for early warm-ups.  We ended up having a pretty good, Pittsburgh weekend.  The kids on the team didn’t spend a lot of time on the metaphorical podium, but they all performed about where they should be at this time of year (slow, rough, dog-tired from heavy training) and the crowds weren’t as surly and claustrophobic as they’ve been in the past at this venue.

After the meet, we were eager to make it downtown to see The Rubber Duck, which both is and is not exactly what it sounds like it is–but I’ll get to that.  First, we needed to eat, so we finally decided, since we were out that way–sort of–anyway, to finally cut across to Brookline and visit the almost-legendary taco stand on Brookline Boulevard at the Las Palmas mexican grocery store.  I’d been talking this place up, based on word of mouth, for a while, so the closer we got the more apprehensive I was about disappointing my wife and kids.  Headed down the boulevard, we quickly saw where we needed to be–and I breathed a sigh of relief, followed by hungry anticipation: on the corner, a group of 20 to 25 people on the corner, most of them Latino, either standing in line or eating heartily from paper plates. This is Pittsburgh–a similar crowd of Poles, Slovaks, or Italians wouldn’t necessarily mean anything, but the region’s Latino population is still nascent–if you see that many hard-working Latino guys at a food booth, well, it’s like a diner where the entire parking lot is full of semi trucks: good things are happening in the kitchen.

We got the last parking spot on the block and walked hurriedly towards the scent of grilled meat.  That was the set up–a grill on a table, under an awning, with delicious corn tortillas on the heat and a variety of fillings: chicken, pork, beef, chorizo, and–if you can believe it–thinly sliced ribeye, with a toppings bar that featured habenero sauce, red sauce, green sauce, an avacado sauce, pico de gayo, tomatoes, onions, cilantro and lime.  And the cost $2 per taco.

Suck it, Chipotle.  This was some of the best food I’ve ever put in my mouth.  In Pittsburgh.  And i don’t even want to hear about taco bell.  You’d pay $15 for a plate like that at Verde over on Penn Ave, and it would only be half as good.  I had the chorizo and the chicken.  The latter was excellent, but the chorizo was sublime–each bite of taco tasted like a little bite of handmade Christmas tamale.  The salsas were equally great–I dumped the pico over everything  and tried portions of the others on a bite per bite basis.  The avacado was really good, the red and green serviceable and hot, and the habenero…oh, man.  Just a dab was like lighting a fuse: slow burn to full ignition, but rather than an explosion the spice peaked and faded, leaving a complex, delicious remnant in its place.  I should have eaten more.

After perusing the grocery store and grabbing some ingredients for home cooking, we stopped into The Party Cake Shop bakery a few doors down and introduced my daughters to a version of one of Pittsburgh’s premiere traditional food: the Toasted Almond Torte, which deserves it’s very own blog entry.  The Party Cake Shop offers cupcake versions of these glorious creations–white cake filled with vanilla custard, topped with a mountain of frosting which in turn is covered in toasted almond slices encrusted with sugar.  In it’s legendary cake form, from Prantl’s Bakery Burnt Almond Torte is the food of Angels.  Fat, decadent Angels.

Stuffed, on the verge of sugar coma, we motored downtown and were shocked to find it packed–huge crowds had turned out to visit the The Rubber Duck, a wildly–and somewhat unexpectedly–popular piece of public art that has been on display at “the point” in Point State Park for the past several weeks.  I’m a big fan of installation art in general, and offbeat public art in particular, so the duck was right up my alley, yet even I was surprised at the thousands who were there for the final weekend, not to mention the hundreds of thousands who have visited overall.  (you really want to click the following pic to make it large.)

The entire experience was awesome–first of all, we found $3 parking, which in and of itself was a victory,  In the lobby one of those parking tickets with the magnetic strip was laying on a table–the kind that says “pay in lobby before leaving.”  On a whim I glanced about surreptitiously and, once the coast was clear, inserted it into the machine.  A bill popped up for $2978.00.  My wife gasped and bolted–my daughters and I burst into laughter.  We crossed PPG place and the square, which was loaded with people on a seasonal day with light sprinkles, and joined the crowd of thousands walking down to the riverfront.

I love art, but don’t know the first damn thing about it, and I used to spend a lot of energy trying to figure it out, like some sort of intellectual riddle, until a sculptor friend of mine said to me, “You like what you like, and you know what you like–learning about art in general might help you increase the breadth of work you appreciate, but don’t waste too much time thinking about it.”  And that’s made all the difference–for me, art is about emotional response–I look at something and I try to process it first on an immediate level, aesthetically, then move on to context, wonder about the process, and then let it wash over me and enjoy the reaction.  Only after that do I turn to the little explanatory cards, the author bio, or any literature connected to the piece.  My response to the duck was the emotional equivalent to a broad smile–it’s a big, yellow, rubber duck.  It’s fun.  I convinced my elder daughter to sing Ernie’s Rubbery Ducky song from Sesame Street right there in front of everyone.  We belted it out, too.

We ended up the day with a stop at Trader Joe’s–as most of our trips to Pittsburgh end, seeing that we’re country rubes and don’t have easy access to some of the fancy and affordable treats they’ve got there.  We felt a little bad skipping visits to friends in the city, but the kids needed to be home for a Halloween/birthday party and, by that time, we were in a bit of a rush.

The next morning, we did it all again, only the swim meet lasted longer, the stops were less blog-worthy, the food less satisfying–but the sunny drive home highlighted near-peak autumn foliage–the forests burning with reds and glowing golds–and we got home in time to flop down on the couch and watch the Steelers tussle with the Ravens–and with a favorable, but somewhat nail-biting, conclusion.  A good weekend by any account.