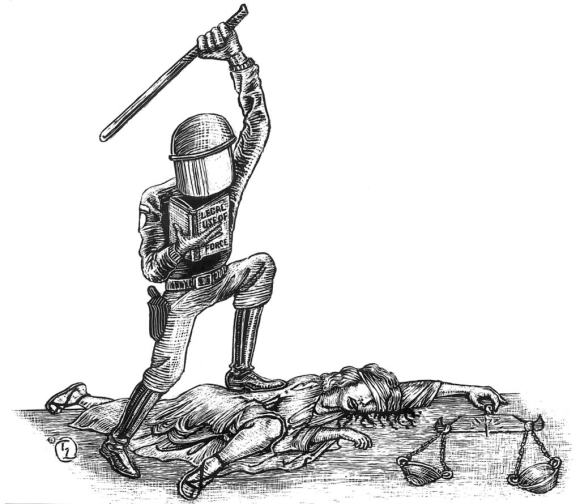 Not being privy to the facts, I can’t begin to comment on the specific events in Ferguson, beyond that it fails the “stink test” though not as badly as the do many other police-related acts of violence.  The sad truth is that Ferguson, as painful as it has been to so many, is just part of a chain of incidents, and the unrest occurring there represents a continuity of events, and frustrations, that has been going on almost forever.  It is only going to get worse, because each time an officer of the law is acquitted other officers become less fearful resting and potentially constructive article which I agree with whole-heartedly. I would, however, add a few items that, I think, would help to alleviate the sense of powerlessness, not to mention the scent of obfuscation and and concealment that hangs over so many incidents of police violence.

1.) In the face of an incident, police officers should be treated as would any citizen.  If I kill a man in the street, I am almost certain to be arrested, processed, and confined pending a hearing.  It is likely I will be perp-walked before cameras, my name and background released to the press.  When a police officer kills a man in the street (or commits any criminal act either in public or private) the police department involved generally makes efforts to shroud the officer’s identity, and months–sometimes years–can go by before the investigation, and any charges, are addressed and during that time the officer may continue to serve, or at worst incur a reduction in duties.  It is little wonder that citizens suspect collusion between police perpetrators, district attorneys.  A potential crime is a potential crime.  Giving police privacy that civilians don’t enjoy is a luxury we, as a nation, can no longer afford.