If you live within a day’s drive of Bloomington or Indianapolis, go to The Tap and give this guy’s beer a whirl. While it is true that he is allegedly related to me, and while it also seems that he wears the same sweatshirt every day, he really knows his way around beer. And now I’m thirsty. Sigh. Luckily I have some of his stuff in my fridge. Check out his profile.

We recently had the first crisp evening that hinted at the changes to come, that feeling in the air that native Westsylvanians recognize as “a Football Night.” In the verges, the annual flora are showing wear, the color of goldenrod lines country roads and the counts of our prolific whitetail deer seen dead along the highways, stirred to their violent ends by the hormonal surges of the rut and the the instinctive understanding that food will soon be much less abundant. In the trees, the earliest leaves are already beginning to flush, and in the bars and coffee shops, restaurants and bakeries, the taps and pitchers and shelves are suddenly and predictably weighted by food and drink flavored with “Pumpkin Spice.” If you expected me to offer consolation, I apologize. I have none to give. Indeed, the words that might help are these: be strong and resolute. Like all tribulations, this too will pass.

No theme this week…just a week’s worth of my favorites.  Starting with some vintage Pittsburgh swimming.

You’ve already seen the beginning of the carol countdown, and an accounting of the related carol conflict, but that’s just the tip of the Christmas and Holiday-themed carousel of seasonal chaos headed your way.  I’ve got more musical selections, tales of my childhood, thrilling accounts of my seasonal holiday activities, and of course it wouldn’t be Old Road Apples without some very festive photos lifted shamelessly, but with the utmost respect, admiration, and affection, from a wide variety of strangers.  Let the rum-soaked holly-festooned revelry begin.  And I didn’t even tell you about Thanksgiving yet.

Because everyone knows that Santa is the REAL World’s Most Interesting Man.

I get a kick out of thinking of wild-minded Walt Whitman and the decidedly staid Emily Dickinson as something between Adam and Eve and a prism.  There was American poetry before, and American poetry after the pair–but almost everything before led to them and everything after sprung from them, through them, and what didn’t was still illuminated by their refracted light.  I imagine some sort of cultural birth story–Walt Whitman as father figure, consuming all the verse from history before him, processing it into a seed, then planting it deep in the womb of Dickinson, the “Virgin Belle of Amherst”–it’s conveniently very Christ-like, when one thinks of it.

Some of my favorite memories include a series of nights, back in the way back, when I worked for several summers in Grand Teton National Park.  It was a rather transitional time for me, arriving in Wyoming on the heels of a few dark years, embarrassingly sullen and depressed and emerging a few years later a completely different person, rippling with joy, affection, gratitude and an enthusiastic optimism which must have, to those who followed me through, seemed both cloying and redundant, certainly worth a good bit of head-shaking and eye-rolling.  It’s an odd process, having to learn to be happy.

But I digress.  Among the many great people who charitably shared their friendship with me–a few of whom stop by this blog now and again–were a great bunch of guys who shared my affinity for both playground basketball and poetry, two of the closest things to religion I’ve had in my life.  You guys know who you are. One evening, after beating the crap out of each other at a parking lot hoop, we went looking for some trouble only to hear from our friend Kim that a bunch of girls were going into town, but we weren’t welcome.  “It’s a girl’s night out, sorry” she drawled, in the sweetest Carolina voice I’d ever heard.

We were immediately indignant, but undeterred.  We’d have ourselves a “boys night out” and, girls be damned, we’d have a hell of a time.  We wasted no time loading up the back of my old station wagon with firewood, sleeping bags, a bounty of cheap canned beer (Busch?  Keystone? shiver at the thought), and some books and rolled out to a favorite camping spot near “the Buddha stump” on Pacific Creek–an improbably big cut stump in a wash at the edge of about 8 million acres of wilderness.  Our goal: build a big-ass “white man’s fire*,” drink beer, and talk shit on the wimmin who’d abandoned us.

We stoked a blaze, flipped some pop-tops, and got onto the disrespecting women, at which point, to our great consternation, our failure was evident–it quickly became obvious that we loved women, possibly more than we loved ourselves, missed them, had nothing at all bad to say about them, and quite frankly wished that we had some with us** right at that moment.

But we moved on to the poetry, and quickly discovered that we shared an appreciation for Mr. Whitman, who quickly became Poet Laureate of Boy’s Night Out–an irony we appreciated only many years later.  We read, drank, and bullshitted deep into the night before, too tired and too drunk to continue, we fell asleep in the dusty soil around the fire–taking time to all piss on it, surrounded by fresh, empty, scattered beer cans in the heart of Grizzly country.  Genius.

The Boys Night Out theme was repeated, with various personnel added to the core, several times–though probably not as many, or as often, as my memories encourage me to believe.  When Steve got married (to one of those women who went to town without us on that fateful night), his local stag party was Boys Night Out Writ Large–though I didn’t sleep in the dirt, but in the cab of Jeff’s truck, having spilled beer down my shirt and become paranoid about being bear bait.

Of all the electric verse we quoted on those nights, I can’t help (owing to my supreme, juvenile nature, I’m sure) thinking of this one first–in which the overtly gay Whitman, who vacillated between denying his sexuality one day and playing coy about it the next, overcompensates his testament to heterosexuality just a little too obviously, not to mention humorously.

Leaves of Grass 106. To a Common Prostitute

Till then, I salute you with a significant look, that you do not forget me.

*from the line in that year’s hit movie Dances With Wolves, “only a white man would build such a big fire.”
**the happily married 47-year old me smiles at the idea of being unable to summon up words to whine about women–ah, to be young and single…actually, no thanks.

I just can’t help myself–looking at photos tagged “christmas” on Flickr, this one stands out among the volumes of cute kids, happy families, piles of presents and cute kittens batting at ornaments.  Caveat emptor, right? But man, do i LOVE FLICKR. It’s like WalMart and the Carnegie Museum of Art all wrapped up in one.

My innate sense of fair play requires me to link to an actual, legitimately sexy Christmas picture: 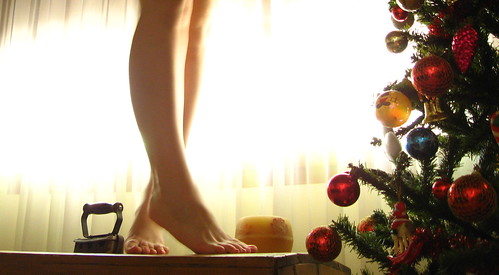