There is a nice article right now in Rolling Stone on a historic and heroic struggle that is happening just a few miles up the road from me. A while back, a big corporation came to a tiny little community and said, “we’re going to dump all our pollution here.” A lot of the good country folks who live there said “No, please.” The giant corporation said. “Shut up. We’re a corporation. We have human rights and we’ll do as we please!”

So the people went to the state and the Department of Environmental Protection agency said, “What we protect is the rights of corporations to use the environment as they see fit.” And so the people said, “Okay, we’ll do it ourselves.” So the corporations sued them and, to add insult to injury, the government sued them and still this group of renegade rural folks is standing strong, like real Americans, conscientious, committed, and courageous. The people of Grant Township Pennsylvania, and the East Run Hellbenders Society should have songs written and movies made about them. And maybe they will, in the end.

You’ll be hearing more about this. In the meantime, if you don’t know what a hellbender is, behold its awesomeness.

I wrote this late last fall, held it back to do some research–so I could write reasonably, not just emotionally–and then held it back some more as we got into the holiday season and I wanted to focus on bright, shiny, happy holiday things.  Well, it’s grim and cold and gray outside, and this blog needs more of my original writing in it, so here you go.

Last Sunday morning was beautiful–crisp autumn air, blue skies, the forests in the Laurel Highlands of the Allegheny Mountains not yet wholly shed of their fall finery.  We take this short, 4.5 mile hike every other year, it seems.  Wolf Rocks.  A good stroll through rolling country along the top of Laurel Ridge, challenging only in the rocky trail; it is a real ankle-turner if you’re not careful, but it’s not aerobically challenging, and the payoff is huge–a broad, beautiful view across a valley that is particularly fine in autumn. I didn’t take any pictures of the view yesterday, feeling sullen and grumpy by the time we got there, but here’s a shot from–holy cow!–

a decade ago, of some friends of ours, folks with whom we have covered a lot of miles over the years. And here are plenty of pictures taken by other people.

It’s a great place to play–there are several other short hikes to interesting places nearby, if you want to make a day of it, and another, similarly dramatic overlook on the other side of the ridge that is less than a half mile from it’s trail head and thus absorbs most of the night-time beer parties, trash, and graffiti.  Partiers don’t often make the trek to Wolf Rocks–it’s too far to lug a lot of beer, and a drunk would kill himself on the rough trail on the way out.  We particularly enjoy the company on this trail, which isn’t usually the case for a surly misanthrope like me.  You see a lot of families with children, hardcore dayhikers, and plenty of mountain bikers–it’s encouraging, especially considering what’s coming

I didn’t start the day grumpy and sullen, but about a third of the way into the trail we encountered this: 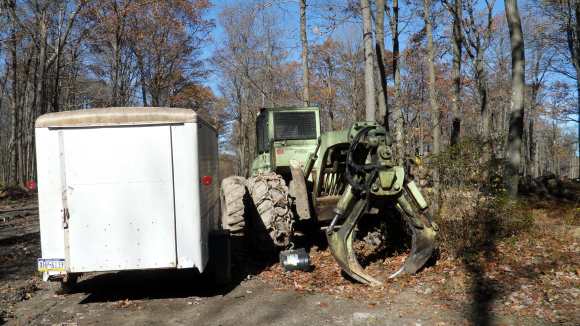 It was worse than the pictures show, but I wasn’t eager to wade through 6 inch deep mud bogs to catch the breadth of the work.  Additionally, trail signs had been torn down–undoubtedly the work of the loggers.  I’ve had encounters with timber people on public land, all of them negative–and I’ve always been on my best behavior, but it usually isn’t a two way street.  Most of the loggers I’ve met in the woods are antagonistic, often confrontational when they see me in “their” public forest.

Now, despite my avatar and icon, I’m a big picture environmentalist–which is a no-win because it means that a lot of my peers think I’m conservative, but all the folks I disagree with still think I’m possessed by the spirit of Stalin himself.  (No, I tell ’em, “for the record I was always a Trotsky-ite.”)  Of course, the caliber of conservative demagogues I generally encounter wouldn’t know the difference between Trotsky and a good, salty latke–but that’s another story.  A beer can by the side of the road doesn’t bother me–my inner cynical misanthrope tells me that there will always be a beer can by the side of the road. I drive an awfully, irredeemably inefficient V8 4×4, and have been known to walk out of a room and leave the light on.

I embrace extremist environmental positions because the other side can also be counted on the be extreme, and when moderates drive the debate one outcome is certain: all compromise and concession will happen on the conservation side of the table. It’s like this: when wilderness protection for a tract of qualifying land is debated, there is always a question of “how much?” If the conservationists seek to protect a thousand acres, the conservatives (confusing, that conservatives are anti-conservation, ain’t it–not to mention that liberals want to rein in the quite liberal consumption of waning resources) will invariably call for a compromise, carefully avoiding the fact that a mere 2.7 percent of the contiguous United States remains as pristine wilderness land. 97.3% of the land is already off the table.  Let’s protect 650 acres and open the rest to offroad trail driving, they’ll proclaim.  Just to be fair.

Or think of you and I eating a chicken, and you eat everything but one drumstick (even the beak and feet, you crazy bastard) then look to me and say “You can’t expect to eat that entire drumstick yourself–that’s hardly fair. How about I eat 30% of that drumstick and you can have the rest. It’s better than nothing, after all.”  If you want 50% you have to ask for a hundred, because if you ask for %50 they’ll give you 17% and turn the rest into a strip mine.

Ultimately, I accept that we need to extract resources to fill my huge gas tank and make my toilet paper–and I do like toilet paper, as long as it’s not to cushiony–but the greed and arrogance of it–not to mention the ignorance–drives me mad. A large clear cut (and let’s not talk about the lazy, short-sighted practice of clear-cutting) along one of the region’s most popular and scenic trails is grand arrogance. Why take something beautiful and popular and exceptional and gouge it?  Because they don’t give a shit–not the loggers, who need to buy diesel for their trucks that make mine look small, nor the owners, nor the bureaucrats selling off timber contracts so soon to be ex-Governor Corbett can cut education funding and increase tax breaks for multi-national corporations.  These people live to take a big, greasy dump on the rest of us–the same psychology that leads to teabag culture, “rolling coal” and the whole conservative me-first, me-only douchebag mode of thinking.

Now, the back-peddle.  Our forests are not pristine.  Pennsylvania was clearcut border to border in the years just before my grandfather’s birth.  It was often referred to as “the Great Pennsylvania Desert.” 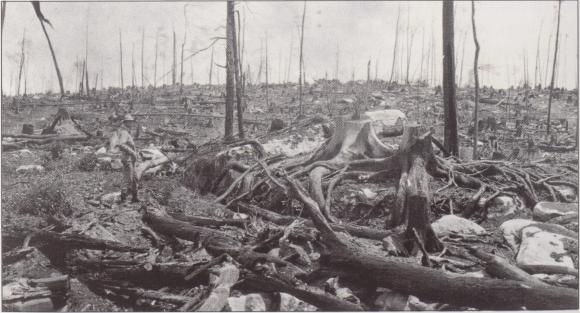 At the height of the devastation forest-fires, if you can call multitudinous acres of dried slash and stumps, swept the state, followed by rains the washed away thousands of years of topsoil.  A hundred years later and our forests are reborn–though again under seige not just by loggers and strip miners, but by natural gas drillers who denude a hundred acres when ten would work, who clandestinely dump their poisoned well-water in our streams in the dark of night, who cloud our air with irritants, seek to inject their waste into our ground, and leave their pits of chemical-laden brine to evaporate or overflow, whatever their God sees fit while filling the coffers of corporations and vagabond laborers from foreign nations like Texas and Oklahoma.  Soon enough, we’ll be left alone with their mess, the much-despised EPA left to clean up, the tax payers left with the bills.

And we’re still trying to get ahead of the carnage wrought the the coal barons of my grandfathers’ time.

So maybe that small clearcut, a big gaping “fuck you” to all who pass by it, is a good thing–soem studies suggest that these big open spaces sustain wildlife and create diversity, a sacrifice for the larger good (we’ll see–I’m going to make a point of going back next year to see how they leave the site, but experience shows that most restoration work is half-assed, and there certainly was no erosion control at present).  Still, I can’t be the only person it pisses off.  I subscribe to the belief that with a little bit of forethought and attention, and a whole lot of oversight, we can make good use of natural resources without heavily impacting recreation or ecological stability, but every time I turn around I see more like this–a willfully blind, disrespectful, and ultimately stupid action that is little more than a Budweiser-sotted smirk and a middle finger at the rest of us.

Sometimes the Dark Side and the Dumb Side co-exist in the same space, like 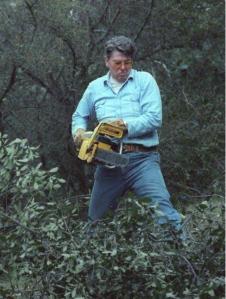 “At some point we must draw a line across the ground of our home and our being, drive a spear into the land and say to the bulldozers, earthmovers, government and corporations, “this far and no further.” If we do not, we shall later feel, instead of pride, the regret of Thoreau, that good but overly-bookish man, who wrote, near the end of his life, “If I repent of anything it is likely to be my good behavior.”

“One man alone can be pretty dumb sometimes, but for real bonafide stupidity, nothing beats teamwork”.
-Ed Abbey

*I’ve stopped numbering these.  Why bother to keep track?