I’ve been hit from several sources with Instagram pictures of famous folks clutching hashtag placards, earnest twitter tweets, petitions to “bring back our girls”–all in reference to the horrific kidnappings in Nigeria, and it just strikes me that neither petitions –nor the President’s team of negotiators, nor even the signatures of a few thousand really sincerely sympathetic suburbanites aren’t going to have a lot of weight with sociopaths who kidnap schoolchildren and pledge to sell them in the name of their god. Their merciful, loving god.  Something tells me they’re going to have some explaining to do.

It strikes me that what we need instead are bounties and mercenaries. Plenty of mercenaries in the world–lets’ get all Blood Meridian on the bastards, pay rewards per returned girls + bonuses for for the confirmed pelts of religious whack-jobs. Hell, for the right reward I’m betting that some of the locals who are hiding these people might very well slit a throat or two in the night, in exchange for a little bling. Or some clean water. Yep, I’m sliding right on this one–asking myself, what would Teddy Roosevelt do? He’d swing that stick. I mean, we invaded Iraq over a simple Bush family vendetta–the very least we can do is unleash a little hell on some sick stone age sumbitches.

Seriously, as the cost of searching for that mysteriously crashed airplane in the rises by millions every day–worldwide it’s hundreds of millions spent already, in a search for corpses.

In fact, it seems the modern, developed, “western” world is lagging far behind the pastoral, largely agrarian Nigerians themselves–a group of approximately 500 “traditional” hunters, armed to the teeth with homemade weapons and fortified with mystical talismans and super-righteous indignation, has gathered in the city of Maiduguri–they’re pissed, they’re impatient with the hesitant government response, they’re not afraid, and they’re out for blood.  Right on.

The government would be fools not to let these bad-asses go about their business–I’m remembering that old Patrick Swayze movie,  Next of Kin or something like that, where a southern kid gets killed by the Mafia in Chicago and all his scary cousins creep out of the swamps with their compound bows and hunting knives and go to the city to exact revenge.  Multiply that by a few hundred hardcore hunters, from teenagers to septuagenarians,  confident that God and Justice are behind them, and you’ve got a force to be reckoned with. Pair these guys up with some machine-gun toting mercenaries and Nigerian soldiers, then stand back and watch. 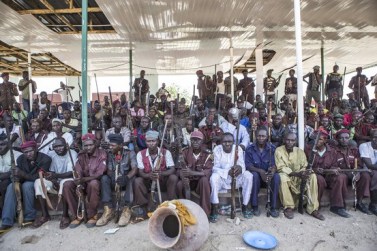 “We are seasoned hunters, the bush is our culture and we have the powers that defy guns and knives; we are real men of courage, we trust in Allah for protection, but we are not afraid of Boko Haram,” said one elderly hunter, Baban Kano.

I’m not a man of violence, because violence rarely provides a solution, but sometimes the enemy is so stubbornly unreasonable, it’s crimes so horrible, that force is required.  These madmen deserve nothing more than to be hastened into the judging company of their God–where I suspect things aren’t going to go so well for them.

So, like the old man said, “Cry havoc, and let slip the dogs of war.”