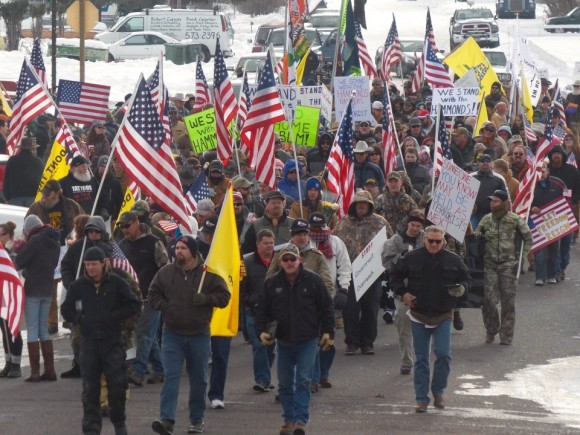 *This is an initial response to a continuing and evolving situation. Bundy & his comrades are now demanding that the Hammonds’ sentences be cancelled and that the Malheur National Wildlife Refuge be surrendered by the federal government and handed over to ranchers, drillers, and timber operators.

Ammon Bundy, son of Nevada rancher, scofflaw, and cheat Clivon Bundy (where do these people get these names?), is in the news again, chasing the media spotlight to rural Oregon, where he is attempting to re-create the hoopla and hysteria that arose back when Clivon Bundy and his family rallied up their bug-eyed militia brethren in response to the federal Bureau of Land Management’s astounding insistence that the Bundys pay the fees that they had incurred over decades of grazing their cattle on public lands.

I’ve written about the elder Bundy here and here before.

Now, the younger Bundy is throwing his influence with the militia and conspiracy set to rally wackos and misanthropes to another exaggerated cause, protesting sentences imposed upon an Oregon father and son ranching duo, Dwight and Steven Hammond, after they admittedly set a series of fires on public lands over the course of nearly a decade.

“This will become a base place for patriots from all over the country to come and be housed here,” self-aggrandizing, self-appointed spokesperson Ammon Bundy said. “And we’re planning on staying here for several years.”

Bundy said they will be “bringing the lands up and getting the ranchers back to ranching and the miners back to mining, putting the loggers back to logging, where they could do it under the protection of the people, and not be afraid of this tyranny that has been upon them.”

The Hammonds, Bundys, and their supporters would have us believe that this is all a government set-up calculated to somehow wrest control of the Hammonds’ considerable acreage. Their main defense is that setting fires is a legitimate land management strategy (which it is) and that the Hammonds, in setting these fires without permits, are nevertheless innocent because they don’t agree with the law. In short, they’re saying that because they know better than the BLM staff who denied them permission, their breaking the law should be permitted.

*Update: Dwight Hammond, 73, and his son, Steven, 46, the Oregon ranchers at the center of the protest, rejected the Bundy federal building takeover, according to CBS News.

They are expected to report to prison Monday to begin serving their sentences. “Neither Ammon Bundy nor anyone within his group/organization speak for the Hammond Family,” their attorney, W. Alan Schroder, told KOIN

This is like getting a speeding ticket for going 84 in Kansas and, despite having seen the 75 mph speed limit sign, contending that the ticket–and the law that determines the speed limit–is invalid because we know that we could have safely driven 90 or more. For most of us, this is an absurdity. We may still break the law, but we understand that we’re doing just that and while we may bitch and moan up a storm about it, when we’re caught we take our medicine.

The subset of anti-government extremists who flock to these “causes” fail to recognize–or refuse to admit–that use of public land is a privilege, not a right. The great irony is that the ranchers who enjoy heavily subsidized access–gaining exclusive access to vast parcels of taxpayer-owned lands at a fraction of the price commanded by private landowners– to commonly held land are often the first to decry the “entitlements” others receive. Some, like the Bundys, simply refuse to pay at all, daring the government to try and collect, tangling those collections up in litigation, and ultimately throwing a world-class hissy fit that ends up with pseudo-solider redneck snipers peering through their scopes and public employees sent to uphold the law.

Men like Bundy and his seditious, criminal father wrap themselves in the flag and brandish the constitution at one momentthen turn and say they refuse to acknowledge the authority of the same when it suits their rhetorical purposes. They have this twisted idea that, somehow, because they fatten themselves at the public teat, for pennies on the dollar (again, which men like the Bundys often refuse to pay), and wear a goofy hat, they are somehow greater and better Americans than those of us who respect the rule of law and pay our own way.

So last week I had myself a little rant about pseudo-patriot right-wing-wacko-anarchical seditious super-moocher Cliven Bundy, who has been stealing from you, from me, and from every other American tax payer for the past two decades–specifically, his gun-toting refusal to “acknowledge the existence of the United States” while simultaneously wrapping himself in the flag.

I made it pretty clear that I don’t like this guy, or what he stands for, which is ultimately selfish greed.  He was right up Fox News’ alley, however, as the Faux network fell all over itself to frame this guy as a patriotic little guy standing alone against the mighty federal machine–and, along with his heavily armed militia friends–won.  Fox even went so far as to dredge up the specter of President Obama raising a leftist citizen militia to supposedly further trample the rights of good old god-fearing conspiracy nuts everywhere.

I just found this Jon Stewart video that says most of what I want to say, but better:

Not every conservative pundit has been asshat in a ten-gallon hat.  Joe Scarborough seemed to have some perspective on the hysteria, and had the courage to denounce Bundy and the caterwauling ninnies who support him.

It’s been with some bemusement, over the past few days, to watch the Bundy idolatry spiral downward into a smoking, flaming wreck, and the native Nevada scofflaw has put his Fox-powered national soapbox to good use spouting anti-government nonsense (and seriously, Fox, this shit is dangerously reminiscent of Tim McVeigh and his murderous cohorts, you really hate President Obama  so much that you’re embracing that camp?) and–who didn’t see this coming?–an overtly racist agenda.

“And because they were basically on government subsidy, so now what do they do?” he asked. “They abort their young children, they put their young men in jail, because they never learned how to pick cotton. And I’ve often wondered, are they better off as slaves, picking cotton and having a family life and doing things, or are they better off under government subsidy? They didn’t get no more freedom. They got less freedom.”

Yep, a racist.  Who’d have thought?  On top of that, it turns out Bundy has been lying about–or grossly exaggerating–his “ancestral claims” by touting a supposed family history on his land since the 1870’s, which the records don’t support.  So, a racist AND a liar.

And now the rats are starting to jump ship.

Splash!  Now they’re fighting over the lifejackets.  Greta Van Sustern printed a quick reversal, after feting both Bundy and his wife on her show–and took the cowardly step of immediately closing comments on her blog so no one could call her out on her hypocrisy.

I’m not the only one who notices.  Not even close.

And I’ll leave you with this, even though I hate Salon.com’s flash-crazy pop-up crazy site:http://www.salon.com/2014/04/24/fox_news_worst_cliven_bundy_lies_22_right_wing_delusions_about_the_absurd_standoff/