I had decided to sit out Martin Luther King Day on the blogging front, and I was not

missed. People with greater eloquence, in grander forums than this, did a much better job of eulogizing and celebrating this great man, than I could ever do. Several times during the day, my thoughts turned to Dr. King, his legacy, and his as-yet, largely unfulfilled dream. More precisely, I dwelt upon the refusal of a large portion of Americans to believe that “the dream” is indeed unrealized.

When I think of Dr. King, I think of two images: the one above, from behind his shoulder looking out over the massive crowd at reflecting pool at the Lincoln Memorial, when he made his famous speech.  The other, for obvious reasons, is this one, a representation of the reality that greeted, and continues to greet, so many Americans. 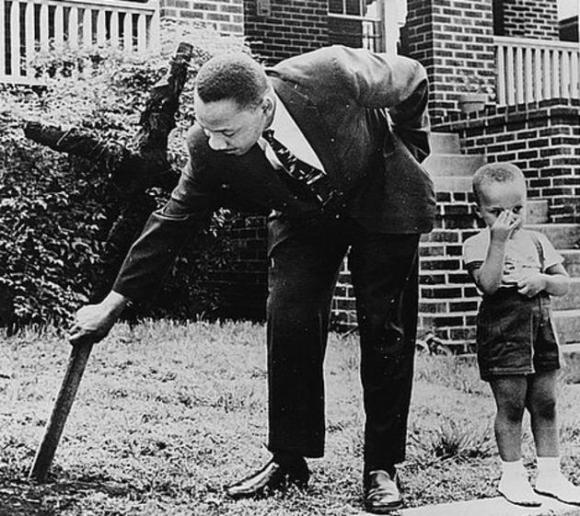 I’ve said it a hundred times: it’s good to be a white man in America.  I know how lucky I am.

The reason I decided to write about Dr. King after all was not a solemn one.  I scribble right now because it just dawned on me that by a quirk of the calendar this year the politically determined MLK Day, which is scheduled to always occur on a Monday, coincides with Robert E. Lee’s birthday. This isn’t the first time this has happened, and it won’t be the last, but it’s the first time I’ve been cognizant of it and I have to say: the convergence of these two, very different, iconic historical figures pleases the heck out of me.

Specifically, I’m enjoying the hell out of ruminating on just how vexing this must be the the rebel-flag waving “you can’t possibly understand southern culture” crowd. I imagine them getting all confused with their crosses and Tennessee battle flags, forgetting which one they’re supposed to fly in front of their mobile homes, and which they’re supposed to set on fire and, as a result. a tangible uptick in the number of trailer fires today in Tickdick, Mississippi and Flatass, Alabama.

Is it wrong to be a wise ass? Probably, but I’m not much for decorum or solemnity.  I’ve never been very good at either.  There is a part of me that his hopeful–the part that wonders if the high profile deaths of so many black men and children, and the inevitable push back from law enforcement, politicians, and a lot of clueless civilians reflexively defending the status quo, isn’t a temblor that might indicate the possibility of a culture-altering earthquake of enlightenment.  Cops have been doing this stuff since forever, but now folks are actually paying attention. We won’t see increased convictions, but communities are demanding more accountability–and so what if those demands are inspired not by enlightenment but by the desire to avoid negative publicity and expensive litigation.  Change is like spaghetti on the ceiling: occasionally it sticks.

It’s going to be a long trip, however it works out. It has only been a few years since a cross was burned on the front yard of a family not 20 miles from where I live, in western Pennsylvania–the home of a family well known for taking in foster children, one of whom, when the crime was committed, just happened to be the one African-American student in their entire school district.  There’s a lot of hate–most of it rooted in the shallow soil of ignorance–in those narrow, twisty roads through the foothills and hollows. But shallow soils lead to shallow roots, so maybe there’s a chance.

“A time comes when silence is betrayal. Even when pressed by the demands of inner truth, men do not easily assume the task of opposing their government’s policy, especially in time of war. Nor does the human spirit move without great difficulty against all the apathy of conformist thought, within one’s own bosom and in the surrounding world.”
— Martin Luther King Jr.

Today our righteous quotes make for an End-of-April Two-Fer.  My good friend Tony posted an excellent Dostoyevsky twitter quote last Friday, which at first made me feel a little guilty considering my, um, propensity for editorializing.  Being the bigger man has never really been my forte, I’m afraid, behavior that has traditionally gone unchecked since, in a very non-symbolic sense, I have usually, actually been the bigger man.  And when I haven’t been, it was pretty much a given

that I was the faster man.

“Nothing is easier than to denounce the evildoer; nothing is more difficult than to understand him.”
–Fyodor Dostoevsky

Yeh, Words to aspire to, but I’m not that guy–and pretty soon this quote popped into my mind (and yes I had to look it up to get the exact words right)

“He who passively accepts evil is as much involved in it as he who helps to perpetrate it. He who accepts evil without protesting against it is really cooperating with it.”
–Martin Luther King, Jr

So, I’m thinking I’ve learned one of two things here.  Either that real wisdom comes from knowing when to practice understanding, and when to abandon understanding for defiance and confrontation.  Either that, or Dostoyevsky was simply a skinny little chump afraid of getting his ass kicked by the bullies.*

*A patently unfair joke at his expense–Dostoyevsky was a great writer, who survived internment in a labor camp after he pissed off the Tsar.  I love his stuff.  Hemingway loved his stuff, too, and that means he’s good enough for anyone.

Before you read further and get all indignant, let me remind you I’m a big fan of Jesus–my upbringing in the bosom of the Methodist Church formed the framework for much of my morality–and, of course, my cynicism, my expectations of inevitable hypocracy and, ironically enough, my deeply sentimental conviction that there is good in the world (maybe not a lot, maybe not enough, but enough to be foolishly hopeful.)  The thing I would have liked to hear more about in church was Badass Jesus, Defiant Jesus, Superhero Jesus, Jesus tearing up the temple and putting the crooks on their asses, Jesus the Original Left-Wing Troublemaker,

Jesus sticking it to The Man, Jesus fighting the system like Robin Hood, like the Dukes of Hazard and, ultimately, Jesus taking a metaphorical bullet for talking too much and shaking up the power class, like Bobby Kennedy, MLK, Malcolm X. I’m pretty sure Jesus would have been a cool guy to sit down with, have a beer, and talk about those crazy Occupy kids and our favorite episode of My Name Is Earl–I mean, Jesus was a tradesman, at the end of the day, a carpenter. And a guy like that, you can bet he had a sense of humor.