These posts keep showing up in my timeline, and here’s the disclaimer: I wish I had the reserve to keep my mouth shut, because I’m passionately indifferent about gun control. It is politically untenable and pragmatically impossible. The “war on drugs” has cost us billions, with billions more to be spent, and for what: we give up (and rightly so) on demonizing marijuana and face growing problems with both methamphetamine and a buffet of misused gourmet narcotics, not to mention a shocking and disgusting epidemic of heroin use. Yeh, heroin–the drug that, when I was a kid, was identified with back alley junkies half a step removed from the walking dead, is cool.

And we want to repeat this with guns? Piffle. It is fairy tale idealism like this that makes me cringe when folks mistake me for being a liberal because I like trees better than people, and schools better than corporations. Still, the question I must ask is this: just who the hell do you think is “making us give up our guns?”

The answer is NO ONE. Oh, there are people out there who loudly express their desire for a gun free society, who desperately want harsh gun control, but it’s like I tell me kids: I want a pony, but nobody is lining up to give me one, not even for my birthday.

Now, some folks want to make it a more discerning process to get more guns, but never once has anyone with any authority or influence made any attempt to legally, systematically take away weapons from honest people. The hysteric paranoia in this regard verges on the absurd. People defend invasive government infringements on personal liberties such as “stop and frisk” by saying “if you don’t have anything to hide, you shouldn’t mind” but when someone says “maybe a longer waiting period and more exhaustive and comprehensive background checks to find out if you’re a felon or a loony” is akin to the Germans rolling on into Poland. The only people talking about taking guns away from citizens are the NRA which, it is good to remember, is legally incorporated not as a grass roots advocacy group, but as an industrial marketing and lobbying organization.

I found this interesting sign during a recent google adventure, and it led to some interesting research.

Frank Tanaka immigrated to the USA in 1903, when he was 16 years old.  Twenty-nine years of hard work later he opened a popular Japanese restaurant in Salem, Oregon and became a respected businessman.  His story, told on the sign he placed in the window of his restaurant after the Japanese attack on Pearl Harbor on December 7, 1941, is not an uncommon one.

Not long after this sign went up, Mr Tanaka and his family were forcibly relocated to the Tule Lake concentration camp, along with most ethnic Japanese living in the western United States, regardless of citizenship status.  Like all internees, Mr. Tanaka and his family were allowed to take only what they could carry.  In some cases, non-Japanese friends were able to protect some of the internees valuables, but many more saw all of their property looted, or sold off illegally–or simply claimed by others.  After the war, many of them came home to find other people living in their homes, often still using their furniture, and they had no legal recourse for reclaiming their property.

Most Japanese-Americans lost everything they owned during World War 2, but despite this, despite losing their rights, special volunteer units drawn from the husbands and sons of the 10 concentration camps set up to punish the Japanese for their ancestry, fought tenaciously in some of the fiercest battles in the war.

Over 122,000 people of Japanese extraction were interred during the war–nearly 70,000 of whom were American citizens. Many others had been in this country between 20 and 40 years.  No person of Japanese heritage was convicted of  sabotage or espionage during the war.  None.

As the war progressed, small numbers of German and Italian prisoners of war were incarcerated at Tule Lake.  Though segregated from the Japanese Americans, these confirmed enemy combatants were often given much greater freedoms.

Mr. Tanaka’s restaurant did not reopen after the war. 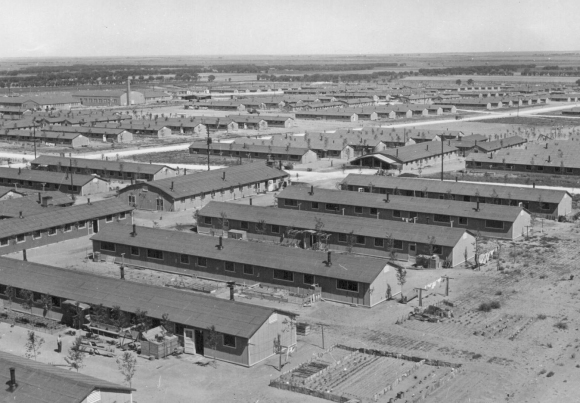