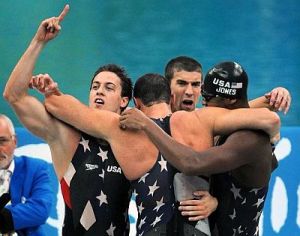 Most people pick USA vs. USSR Hockey or basketball.  Now, my mom wasn’t even born when Jesse Owens rubbed that whole “master race” crap in Hitler’s face in Berlin, 1936,  and I wasn’t quite two years old at the time of the famous “black power” salute in Mexico City, 1968.  Those were big, historical moments.  The most exciting moment I’ve experienced was, admittedly, a whole lot smaller and lacked any real political subtext beyond the usual, benign disrespect between Americans and French–you know: we’re lazy and tacky and like ketchup and peanut butter, and they smell bad, breathe arrogance, and habitually surrender to Germany at a moment’s notice.

Allies who love to hate each other make perfect rivals, especially when Alain Bernard, the superstar French swimmer, derisively dismissed his USA counterparts before the 4×100 Freestyle in the 2008 Beijing games.  “The Americans?” Bernard sneered, “We’re going to smash them.  That’s what we came here for.”

While the cameras focused on USA Star Mike Phelps and Bernard, in the end it was veteran Jason Lezak, the oldest member of the team who was, for the most part, largely unknown outside the swimming world, who took down the haughty Bernard.