My teenaged daughters recently discovered old episodes of Friends on Netflix, and while imposing myself on some of their recreational time recently I noticed that Jennifer Aniston has not only maintained her youthful appearance, she is arguably even hotter

in her 40s than she was in her late twenties. In those old episodes she was cute, but she’s transcended that to the rarefied level of scorching magnificence while somehow maintaining a girl next door sort of casual appeal.  It’s a wonder, given that dynamic, that stalkers don’t surround her castle like the suitors of Penelope at Ithaca.

At first I thought is was just me, and my own aging perspective–the young girl thing doesn’t really rock me any more, aside from a general acknowledgement of aesthetic appeal. College girls–and the flock of young, indistinguishable from each other, hollywood starlits flooding television and mainstream movies– look like children to me, not just out of my league but, you know, eeeeeewwww creepy young. Criminally young. But someone like Tea Leoni? Woff, woof. Or Sheryl Crow, Julianne Moore, Diane Lane?  Those are proper subjects of respect and admiration. I’ve never really thought of Aniston as a sex symbol or, as Websters’ calls it, a “smokin’ hottie,” but my childrens’ discovery of her forced me to re-evaluate.

This Aniston, however, is–or was–a bit of a conundrum. Can clean living do all that? Was there medical intervention?  An inspection of Aniston’s close friend and fellow Friends alum Courtney Cox, reveals that the answer is no: Courtney looks great, but we can see right through that shit.)  There can only be one solution: cannibalistic filicide. 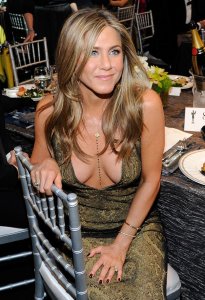 According to the tabloids at which I’ve been gawking while in line at the grocery store over the past 20 years, Ms. Aniston has pretty much been constantly pregnant for most of my adult life.

Twenty years of pregnancy means at least 18 babies, presuming a quick turnaround following a typical 40-week pregnancy and a bare minimum 4 month recovery time, and not factoring in the many sets of twins she has been rumored to have conceived.  And yet, we’ve heard no rumors of either termination nor miscarriage, but…

Could Jennifer Aniston have the most tragic reproductive history in the entire…um…ever?  Given the volume and intensity of new coverage she’s historically generated, I suspect we’d hear about it, loudly, were it true. So the only solution is:

Jennifer Aniston becomes impregnated by some of Hollywood’s most vibrant stars, carries their children, and upon delivering these children under top secret conditions, she eats her young, consuming not only their vibrancy but their very souls.  It’s the only viable solution. 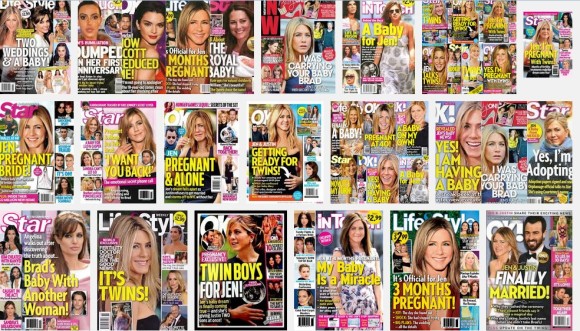 I’m not pregnant, not nursing and I love margaritas….so what are you doing Friday?