An initial foray into the world of autumn posts revealed a whole lot of gifs, clip art, graphics, cute photos of other people’s children raking leaves or going on hay rides, and creepy-ish images that remind me of stuff cut-and-pasted from an LL Bean catalog.  Or Sears Roebuck, even.  There’s also a lot of clearly professional, for profit stuff I don’t feel comfortable pilfering.

I have to admit that I’m a little worried–I feel committed to this whole seasonal photos thing.  If I can’t manage autumn, it sort of makes all the work finding cool summer photos a vain pursuit, don’t you think?  And I’m compelled to make it through because I already have dozens of absolutely outstanding images set aside for next summer.  It’s interesting to think about, though.  Summer

photos encompass a wide variety of activities and one general component I find almost inexhaustible: the beach.  Autumn photos seem centered around a relatively small number of holidays and things: Halloween and Thanksgiving, and leaves and pumpkins.  Fall foliage is resplendent and all that, but it’s best to limit the dosages.

It seems I’ll be required to be creative.  Fortunately, Fall is the shortest season in these parts.  At least for the purposes of my reckoning.  The dates work out sort of like this:

Now there are years where all of November feels like winter, and Fall feels like it landed with the County Fair and the advent of football season at the end of August, and years when Spring hits in March–or hides until May–but these dates reflect my seasonal moods and interpretation of environmental factors.  Like the borders of small European nations prior to World War 2, the boundaries between the seasons are highly flexible–it was 72 at midnight on Dec 22 last year, during our Christmas Party, although we’d already had several meaningful snowfalls.  Not surprisingly, we had a frost in June and a number of strangely cold days this past summer.  With the changing global climate, all preconceptions are off the table. 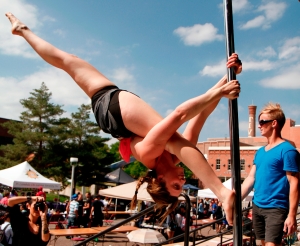 Something else I learned is that there are literally thousands of Fall Festivals in the USA and Canada, all of them running pretty much simultaneously during the first two weeks of October.  Cider and antique automobiles are prominently featured in most, along with hay bales and piles of pumpkins.  I did, however, in keeping with the O.R.A. standards, find one Autumn Festival that wasn’t mired in gauzy images and mundane pumpkin costumes.  What they do have, apparently, is pole dancing.  Go figure.