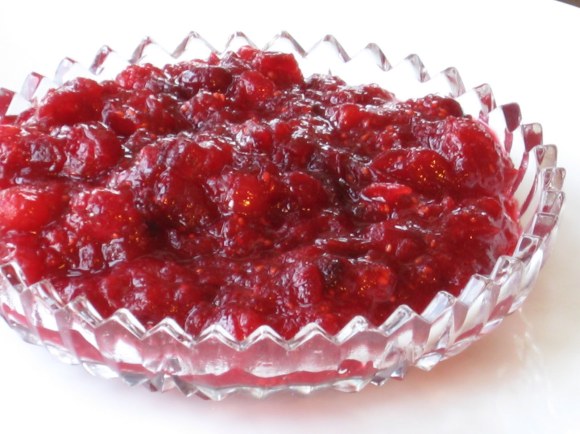 Make your own cranberry sauce.  Do not–for the love of your petty, vengeful, god–serve your guests that jiggly canned cranberry atrocity. He will smite you, if you do.  I promise.

I grew up thinking that the stuff in the can was how cranberry sauce was–a “square earth” belief if ever I’ve had one–even though I could never understand why they called it sauce even though it came out of the can as a sort of flaccid log that my grandmother sliced into rounds that looked like beets steamed for the better part of a week.  Rigorous, scientific study at our research labs in the a secret underground facility in an abandoned coal mine just outside Possum Glory, PA have deduced that canned cranberry sauce is over 50% Petroleum by-product and contains significant amounts of alien DNA–the space kind, not the kind that get my conservative Christian friends all stirred into a gun-clutching tizz.  Further study suggests it is made by a consortium of large corporations including Dow Chemical, British Petroleum, Halliburton and the Dole Pineapple Company–the very same people who, along with WalMart and the Pringles Potato Chip alliance, run the shadow world government.

Make it fresh.  The interwebs are teaming with recipes, and here’s mine.  It’s awesome.

Put the juice and a few tablespoons of water in a large saucepan, add the apple, cranberries, orange, and sugar in that order and bring to a boil on medium low heat, stirring when necessary.  Cook until the berries begin to burst, then add cinnamon and clove and cook until you get a texture you like, between 10-15 minutes.  The longer you cook, the smoother it becomes. I like it sort of medium lumpy.

You can fool around with this recipe as much as you’d like–we’ve made it with just apple or just orange, with and without the clove, and I even diced up a cup of seedless grapes one year in order to add bulk and to use up the grapes before leaving town for the long holiday weekend.

We generally kill a single recipe of this on the day of, but the it lends itself easily to doubling, which I make ahead and store in the fridge in mason jars with plastic storage lids so there’s a chance to have some left to eat with leftover turkey.  Hint: it’s great on toast or bagels, too.

So, perhaps you’re wondering: where’s the original writing?  I began this blog to focus on recycling youthful, forgotten poems, perhaps a few new poems, and excerpts from fiction-in-progress.  I’ve been doing all of those things, but things get in the way of my vow to share them: first the holidays, and now a seemingly ceaseless barrage of interesting links and pictures and gods know what else.  I found “Real Actors Read” by chance–it’s pretty straight-forward: actors doing dramatic performances of unexpected prose including recipes, travel reviews, and so forth.

If you don’t think a pork loin can be sexy, think again:

And if you wonder why people dread American tourists, consider this:

The Lady doth protest too much:

Your passports are worth nothing!  No beer!