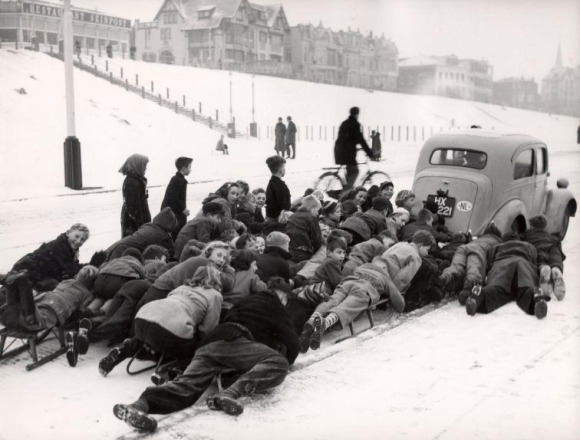 I figured that it was time to start posting some cool “found” winter pictures, the way I do for summer.  The thing is, it is not nearly as easy to find fun, photos of winter–it’s a more serious season, in many ways.  Google “winter” and you get a lot of landscapes and snowy foliage, as opposed to the surfing and bikini babes a ‘”summer” search turns up.  Nevertheless, I found a few.

The image above reminds me , however obliquely, of my own The elementary school days.  My school was at the top of a hill–not a precipitous slope by any means, but in winter before the age of kneejerk school cancellations, and during the heyday of large, rear-wheel drive american cars, there was no shortage of tire-spinning mechanized behemoths churning halfway up the street before surrendering to gravity and backing their way back down the hill.

them of even a single flake, but back in the day snow meant getting ready and going to school a half hour, maybe even forty minutes early, in order to join the daily round of “smear the queer” (yes, I know how that sounds, but I guarantee that not once of us ever gave pause to consider sexual orientation and, in fact, in this game “the queer” was generally the role of the bravest, boldest, and most athletic of the lot of us) which wasn’t as bad as it sounds: in short, one kid has the ball and he runs like hell while all the other kids try to get it from him.  We played in snow over asphalt.  There was often blood.  It was wonderful–we all wanted to be the queer.

Even better, however, was when twenty or thirty of us would be busy beating the living tar out of each other and a car would start spinning tires on the slick hill, and we would run out into the street, en masse, and push it up the hill, laughing and shouting, erupting into a boisterous cheer.

Can you imagine that happening today.  I’d be terrified of the liability issues if a horde of children surrounded my car on a slippery hill.  Eventually, a driver called the school to complain and the principal herded a bunch of us into the school library and proceeded to shout and foam at the mouth along the way towards banning that tradition.  He stopped “smear the queer,” too, just because he could.