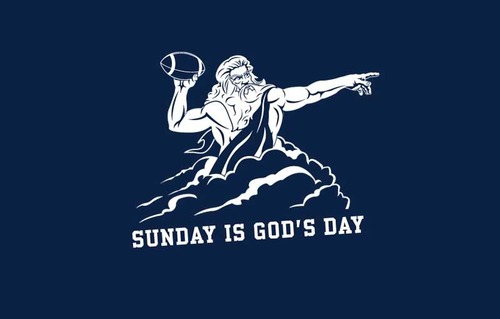 It hasn’t been the best autumn for me, as a football fan. In the opening rounds of the season, all of my favorite teams–Pitt, Oregon, IUP, the Steelers, and our local high school team are a combined 4-7, with 3 of those losses coming from the hometown boys, a bunch of great young men, many of whom I’ve known since they were in kindergarten. A presumed contender for the league championship, it has been one thing after another for them, despite playing well, culminating in the catastrophic loss of our highly touted, college-bound senior quarterback in what looks to be a career-ending injury.

It seemed like they were cursed.  Now, as it turns out, it looks like the blame goes to me for not praying enough.  Or, to be honest, not praying at all.  Or believing in any of that superstitious “Great Sky Bully” nonsense.  Apparently, God is a petty sports fan, and He keeps score.  At least, that’s what about 33% or Americans believe.

Hey,  I was gone again. You missed me. I missed you, too,  just as I missed writing for you and reading your stuff for the past 3 days while I was out of town and busy watching my kids and their team-mates participate in the 2015 PIAA High School Swimming Championships.  It’s kind of a big deal for the kids, obviously, getting to compete against some of their most accomplished peers on a pretty impressive stage: The Kinney Natatorium at Bucknell University in Lewisburg, PA, with television cameras and reporters on site.

A lot of swimmers carry a chip on their shoulders, largely ignored by the media (our local paper is getting better, and we appreciate the love) as well as the students, the and local community at large,  the pride and validation that comes from the Championships is rewarding.  As my kid complained after a pep rally in which a member of the basketball team mentioned that they’d “won our section two years in a row, and that’s a big deal,” our swimming team has won the section something like 11 of the past 12 years.

As for us parents, we’re proud of the kids (ask us and we’ll tell you just how proud), and happy that they get to have this experience, but we also enjoy the camaraderie of  hanging out with each other just as much as the kids have fun with each other.  They’re a great bunch of kids, and it’s taken a great group of parents to get them that way.

And that’s part of it, too.  Every year, States is the last swim for a few of the kids–we lose 4 of the 13 who qualified this year, and while we all talk about how we’ll still see each other we’re all conscious enough of reality to know that it won’t be the same: long hours of shared joy, apprehension, misery, boredom, heartbreak and exaltation create a pretty intense bond.  Basketball games last an hour.  Some swim meets go on for days, during which we often share moral support as well as meals–and in many ways it becomes an almost group parenting situation.  We all look out for everyone’s kids, share in the victories as well as their disappointments.

Of course, we’re lucky to have a very good program.  We have more kids coming up–several came very close this year and will almost certainly make the trip next year (save those personal days, Ken)–and a new group of parents will join us at the all-you-can-eat grilled cheese bar at Bucknell, the between sessions coffee at Barnes & Noble, and the nights of long tables and laughter at a seemingly endless parade of mediocre strip mall dinner joints (Fridays, Applebees, Damon’s…where would you be without us?)  It will be that way long after we say our farewells next year, and that’s a good thing.

As for the results–we’re a proud, successful public school program.  We build our athletes, unlike the dominant private schools (Villa, Shadyside…) who buy theirs, and this year wasn’t the best. Our best swimmer battled injury all year, and two others were in bed with the flu as late as two days before the meet.  Our finishes were in the top twenty, for the most part, which is a disappointment given our high expectations–but no small accomplishment.  Just having 13 swimmers as a public school at States is a feat.

But here’s something about these kids: less than an hour after moving up two spots to claim 15th place in an honorable mention all-state finish, the returning members were already plotting their summer workouts and what sort of self-inflicted tortures they could embrace in order to step up next year.