Having trouble getting into the spirit? I’ve lined up a couple of weeks worth of fun holiday pictures I’ve scrounged and stolen from around the internet over the years, some of which I’ve shared before, some I haven’t.

Having trouble getting into the spirit? I’ve lined up a couple of weeks worth of fun holiday pictures I’ve scrounged and stolen from around the internet over the years, some of which I’ve shared before, some I haven’t.

I found this on Tumblr back in January.  Nice, eh?

I occasionally indulge myself in “willful preoccupation” by scouring the internet for holiday spirit, particularly in holiday form. One of my favorite Christmas photo themes is “other peoples’ holidays”. 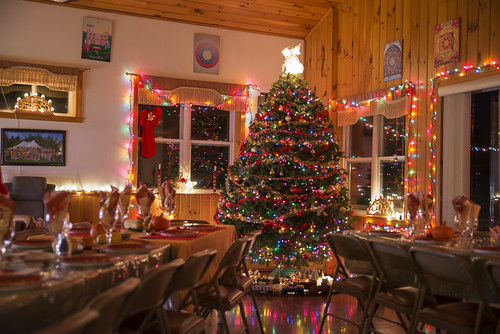 …we bought a particularly nice tree from this unsavory character. I made the mistake of saying, “hey, toss me that tree over there…” Opps.

Man, does time go fast. The semi-feral six-year old ragamuffin making sure the tree is safely nestled in the bed of our truck is going to college next year…

This image is going viral on Facebook. The tag says it is Syracuse–but it reminds me of Europe–looks really nice, so way to go Syracuse….photo credited to Jody Grenier,

A man dressed as Santa Claus stands in front of Germany’s biggest Christmas tree, illuminated by 48,000 lights at the traditional Christmas market in Dortmund, Germany, Monday, Nov. 23, 2015. The 45-meter high tree was built with 1,700 spruces and is a main attraction during advent season.​

My mother was telling me about her earliest Christmases: a genuine “live” tree arrived sometime after she went to be on Christmas Eve, presumably delivered and erected by Santa in the dead of night.  In my own childhood, we bought a tree sometime in the middle of December and kept the tree for a few weeks.  Like many people, I’ve pushed the envelope further–we make “deer day,” the first Monday after Thanksgiving when schools are traditionally closed to allow or predominantly rural population to cull the herd and fill their freezers with venison–but I noticed a lot of people driving around with baled trees on top of their cars, and a lot of shadowy forms in picture windows around town, hanging lights, as early as the day after Thanksgiving.

Folks have their traditions, and their preferences, greatest among them (in terms of Christmas trees) is the old debate of genuine (some say live, or “real”) versus artificial.  It’s a pretty lively discussion I’ve heard again and again, although most of my friends are families

who still have children in the house and go for the traditional genuine tree.  It’s important to point out the place I live, Indiana County, Pennsylvania (we were a county before “Indiana” was a state, for the record) bills itself as “The Christmas Tree Capital of The World,” home to numerous wholesale and retail nurseries.  Interestingly, when my wife and I lived in Oregon, we rented a house in the quaint little working class town of Monroe–when we arrived we were shocked to find ourselves greeted by a sign that read: Monroe, Oregon: Christmas Tree Capital of the World.

Wait a minute!  I would soon learn, with the advent of the internet, that there are quite a few Christmas Tree Capitals, including several in Oregon–but a Google search today is dominated by links to Indiana, PA sites, which settles it as far as I’m concerned.

What isn’t settled is the debate between genuine and artificial trees preferences.  Both sides claim to be more popular, and having admitted my bias I’m not buying the plastic tree argument.  As I said, I don’t see the evidence–I know four households with artificial trees: my inlaws, because they’re retired and not really into it any more, one family with an allergy problem, one family who travel every year and don’t want to leave a try to dry out in their living room, and a couple who are into the whole kitschy “because it’s ironic” thing.  All the dozens of others I know go authentic.

I suppose that there must be an army of plastic tree people in strange, foreign places like Las Vegas and Los Angeles, and maybe even in Manhattan, and those numbers must be bolstered by millions of elderly people in nursing homes around the country, but I’m dubious.

What kind of tree do you have?  And why?  I’d like to hear your reasoning–especially if you’ve gone artificial.

My genuine tree fetish is pretty standard: they look better, smell good, and it’s fun to go pick them out at the grower or retailer.  They’re better environmentally; often growing in locations that traditional agricultural crops won’t thrive, they are renewable while artificial trees are made from plastic and other petroleum by-products.  A used authentic tree can be composted, used for habitat, or–as we do–ground up and used as wood chips for trails and public areas in local parks. Also, an authentic tree supports hard working farmers and laborers, while the plastic tree likely came from an Asian sweatshop.

If I was rich and had a big house, I’d have a bunch of trees with different themes–and one of those would be a big, pink aluminum tree from the 1950s–but until I win the lottery, no plastic tree will cross my threshold unchallenged.

What about you?  Lets’ hear it in the comments.

This one was impossible to resist.