I’ve been through Kansas a few times–it doesn’t seem like a bad place:

lots of sunflowers to go with the wheat, though it’s awfully flat, which puts that whole tornado alley/Wizard of Oz thing is perspective.  One of my very favorite people loved Kansas, and while he lived there only briefly I’ll forever attach his affection to the place.  My wife and I even spent an absolutely wonderful night camping under the stars at Cedar Bluff State Park, about a thousand years ago.  I’ve followed some of the weirder stuff to come out of that state in the years since, specifically the science vs. bible new earth foolishness, but I have to admit I did little more than snicker a little and write it off to old-fashioned stubbornness.

How backwards could they be?  After all, Kansas was a fertile field for abolitionists during the civil war, and some of the fiercest fighting during the war took place in Kansas and Missouri, as militias, guerrillas, and old school n’er do wells on both sides fought tooth and nail over Kansas and it’s status as a free state. Indeed, the term Jayhawker, which has become synonymous with “Kansan” originally referenced the fierce anti-slavery 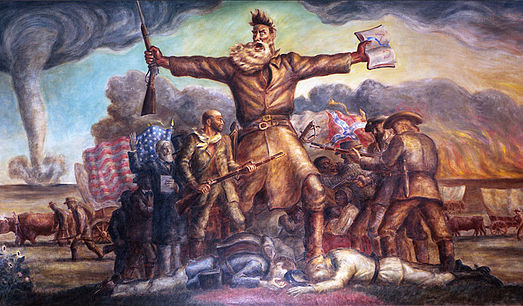 irregulars who fought against the primarily Missouri-based pro-slavery “Border Ruffians.”  This is a state which the legendary John Brown, one of America’s greatest sons, called home, and where his image–and the freedom he has come to represent–is immortalized on the very structure of the Kansas Capital building.

It befuddles me to no end that the state of Kansas would gleefully reject and spit upon that legacy by embracing a set of laws that would effectively establish homosexuals as second class citizens, making it legal for Kansas businesses or individuals to treat them as Black Americans were treated in the south during the days of Jim Crow.  Indeed, the Kansas law may be worse, as it also limits–and in many cases eliminates–the options for redress against such open bigotry.

The law, Kansas Bill 2453, not only carries us backwards a hundred years, but it allows bigots to act on their suspicions, not just facts. Should a business owner decide that I might be gay, he can throw me out on my ear–or you.  Or your parents.  Your children.  Anything goes in a bill that is so purposefully vague that it can be twisted to validate just about any bigotry short of physical violence.

The entire movement is so ludicrous–the vast majority of white Christian Americans are being represented as being religiously oppressed by the relatively small number of homosexuals.  Imagine a room full of 100 people, 96 of whom start beating the shit out of the other 4 percent.  Now, imagine that 96 percent claiming that they are oppressed by the 4 percent who are their victims.

Ironically, folks my age and older will remember when being on the side of “the Russians” was a terrible thing to be constantly summoned by conservatives. Well, where are the Kansan bigots finding their strongest support right now?  You guessed it: Russia.  Way to go, comrades.

On the other hand, Kansas is home to the Westboro Baptist Church–a weird-ass hate-cult that tortures the bible to justify their message of

venomous, violent animosity towards homosexuals and–oddly enough– American war dead.  Yes, Westboro has reserved a place in what Shepherd Book called “that special part of hell”, but who would have thought that the Republicans of the Kansas House of Representatives would go ahead and establish a place for themselves in the same zip code.

Now, I’m reading that it’s not quite a done deal.  The Kansas House got a free one–nobody really expected that these crackpots would actually go out and make themselves look like such a band of backwardsassed buffoons, so they didn’t hear a lot of protesting before the vote–but since then the sky has sort of opened up, raining down a fierce storm of dissent and putting the fear God (more irony) into the Kansas Senate, who are scrambling for ways to be rational and vote against this debacle without alienating the extreme right-wing teat upon which so many of them feed.

This doesn’t change the fact that this happened, or that these yahoos managed to push this through the house with a convincing margin of success.  Rational people aren’t going to forget this, nor will the growing reputation of Kansas at a laughingstock diminish any time soon.  It’s my hope, as it always is when the crazy pull off a coup, is that the resulting backlash will propel the mainstream further towards the future, but as the maxim goes: only time will tell.  It’s quite possible, from what we’ve seen this far, that Kansas will collapse in on itself so completely, so irrevocably, that it condenses into a super-dense black hole no bigger than a pea.

Native, Militant Westsylvanian (the first last best place), laborer, gardener, and literary hobbyist (if by literary you mean "hack"). I've had a bunch of different blogs, probably four, due to a recurring compulsion to start over. This incarnation owes to a desire to dredge up the best entries of the worst little book of hand-scrawled poems I could ever dream of writing, salvageable excerpts from fiction both in progress and long-abandoned. and a smattering of whatever the hell seems to fit at any particular moment. At first blush, I was here just to focus on old, terrible verse, but I reserve the right to include...anything. Maybe everything, certainly my love of pulp novels growing garlic, the Pittsburgh Steelers and howling at the moon--both figuratively and, on rare occasions, literally.
View all posts by JunkChuck →
This entry was posted in Uncategorized and tagged 2453, baptist, bias, bigotry, crow, gay, hate, homophobia, homosexual, house, idiots, jayhawk, jayhawker, jim, kansas, oz, senate, union, westboro. Bookmark the permalink.

6 Responses to Jim Crow, Thy Middle Name Is Kansas

Travel. Seek the beauty in the chaos. Repeat

A site to discuss better education for all